Arlington School Board Reacts to the Brown Decision 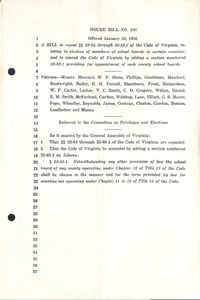 Bill to repeal 22-84 through 22-88.1 of the Code of Virginia relating to election of members of school boards in certain counties. This bill was aimed at the elected members of the Arlington County School Board, disbanding the elected board and replacing it with one that was appointed.

Just ten days after the Brown decision, the Arlington County School Board called for a “Committee to Study Problems of Integration in the Arlington Public School District,” to look at how best to comply with the ruling. The committee included Black and white clergy, teachers, and three NAACP members: Edith Burton, Mary Shirley, and Geraldine Davis. Elizabeth Campbell, a white liberal and pro-integration member of the School Board, headed the committee.

By January 1956, the committee had a preliminary plan in place to desegregate the school system. The committee’s proposal was not particularly bold or far-reaching. It favored only a small number of students desegregating the schools, at least at first. It was a conservative, incremental strategy.

It was also one that had the disadvantage of pleasing very few. Some integrationists, such as Virginia NAACP President E.B. Henderson, saw it as trying to do the minimum amount of integration legally required under Brown, in order to reassure the New York guarantors of an upcoming school bond issue.

On the other side was the Byrd machine in Richmond. Less than a month after the Integration Committee issued its plan, legislation was introduced in the General Assembly to strip Arlington County of the right to have an elected school board. At the time, Arlington was the only county in the country whose school board was popularly elected.

The bill passed, and in July, 1956, the Arlington School Board was replaced with a new group of appointees, chosen by the County Board. This new panel was considerably more sympathetic to the cause of segregation, with a membership that included few racial moderates and some outspoken segregationists.

← Popular Opposition to Integration
Arlington’s Racial Moderates →
1954: Arlington in the Wake of Brown v. Board of Education
Arlington School Board Reacts to the Brown Decision