It wasn’t just the Richmond power structure that was strongly opposed to getting rid of segregated schools. Many, if not most, white Virginians were opposed to desegregation in 1954. Here we have a selection of pro-segregation literature gathered locally primarily by Barbara Marx, a German-born NAACP member and activist who lived in Arlington during the 1950s.

A warning: The documents linked on this page contain some fairly vitriolic racism. Please be advised. They are included because it is impossible to fully understand segregation without understanding racism. Their inclusion on this site is in no way an endorsement of their content.

One thing that might be jarring for contemporary readers is the way that many of these documents rely strongly on Christian-inflected rhetoric. After all, many leaders of the Civil Rights movement were Christian ministers themselves. So why is this?

There is a long tradition of religious justification for racism that goes back to America’s history of slavery. Some have argued that Black people are the descendants of Canaan, the grandson of Noah who was cursed and cast out by his grandfather for his father Ham’s transgression. The descendants of Canaan were said to be cursed with eternal slavery.

The Old Testament has frequent mentions of slavery, and the idea of a people doomed to eternal slavery likely appealed to religious individuals looking for a justification for the institution of chattel slavery.

It is also important to remember that this literature was produced in the early 1950s, during the early years of the Cold War. The American Communist Party had been one of the most consistently racially progressive political organizations in the United States throughout the 1920s and 1930s. Many segregationists argued that integration was a Communist plan, a Soviet plot to destroy America from within. It was not uncommon for segregationists to describe the NAACP in particular as a Communist organization.

Christian Americanism was offered as a healthy alternative to Communist Atheism, and for this reason Christian justifications of the racial order under Jim Crow were seen as a perfect rebuttal to Soviet criticisms of America’s system of racial apartheid. 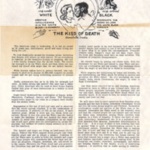 "The Kiss of Death." This racist pamphlet was found among the papers of ABC, and plays to fears about miscegenation. 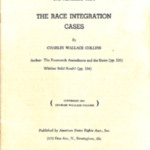 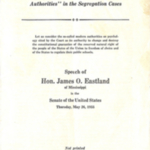 "The Supreme Court's 'Modern Scientific Authorities' in the Segregation Cases"-- Speech of Hon. James O. Eastland of Mississippi before the U.S. Senate. 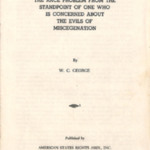 Booklet entitled "The Race Problem from the Standpoint of One Who Is Concerned About the Evils of Miscegenation," by W. C. George, published February, 1955, by the American States Rights Association. 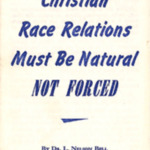 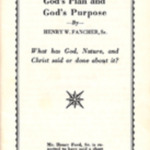 ← 1955: Massive Resistance
Arlington School Board Reacts to the Brown Decision →
1954: Arlington in the Wake of Brown v. Board of Education
Popular Opposition to Integration