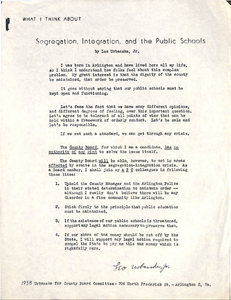 Document by County Board and ABC member Leo Urbanske stating his commitment to public schools and Arlington County.

Due to a particular set of historical circumstances, Arlington’s population differed from much of Virginia in terms of racial attitudes. Prior to the 1930s, the county had been primarily rural. The expansion of the federal government during the New Deal, followed by even more federal growth after America’s entry into World War II, quickly reshaped the county.

People from all over the country flocked to the Washington area for new jobs, and Arlington was an affordable place to live. The completion of the Pentagon in early 1943 made the military one of the largest employers in the county.

This influx included a large number of new residents from the less-segregated North. Likewise, the importance of the defense industry and the military to Arlington meant that more people had experienced some degree of desegregation already—executive orders signed by President Roosevelt in 1941 and President Truman in 1948 respectively barred racial discrimination by defense contractors and ended segregation within the military.

The result was that many white residents in Arlington could be called “racial moderates.” Many may not have minded segregated schools—and some may have indeed favored segregation—but they were far more concerned with the prospect of the public school system being closed down all together.

Because Arlington’s economy was so dependent on the federal government, political participation was complicated. The Hatch Act of 1939 limited the participation of federal workers in partisan politics, so Arlington residents created “non-partisan” groups to advocate for local change, with names like “The Citizens Committee,” and “Arlingtonians for a Better County,” “ABC” as it came to be known.

Prior to the influx of newcomers, the public schools in Arlington had a poor reputation, and those who could manage sent their children to D.C. or boarding schools. When people from outside the South came to Arlington for government jobs, they wanted their children to have strong public schools, like the ones they grew up attending. Many supporters of ABC shared such memories. As a result, the group made school improvement a major issue.

Some ABC politicians viewed the threat of wholesale closure of the public school system to be an almost existential threat. It was due to an ABC campaign that Arlington won the right to have an elected school board in January of 1949. They did not appreciate the state taking that right away.

The new, appointed School Board would be repeatedly confronted with the fact that for many Arlingtonians, keeping the schools open was more important than maintaining segregation

← Arlington School Board Reacts to the Brown Decision
1956-1959: The Road to Stratford →
1954: Arlington in the Wake of Brown v. Board of Education
Arlington’s Racial Moderates