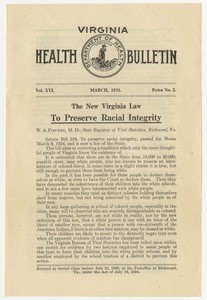 In Virginia, Jim Crow took many forms. It was even enshrined in the new Constitution of the Commonwealth of Virginia, established in 1902. The new constitution disenfranchised many Black citizens by means of voting restrictions. In the section describing public schools, it stipulated that “White and colored children shall not be taught in the same school.”

Another important law was the Racial Integrity Act of 1924. This act was specifically designed to prohibit miscegenation, or “race mixing.” It defined “whites” as only those people "who [have] no trace whatsoever of any blood other than Caucasian." To preserve whiteness, the act prevented marriage between whites and nonwhites, who were described in the law as “colored.” It required that every birth certificate issued in the Commonwealth state the race of each infant. It also required the forced sterilization of Virginia citizens found to be “mentally ill” or “mentally deficient.”

In addition to the Virginia Constitution and state laws like the Racial Integrity Act, Jim Crow took the form of numerous local ordinances as well as property covenants that prohibited selling homes in certain neighborhoods to “colored” citizens.