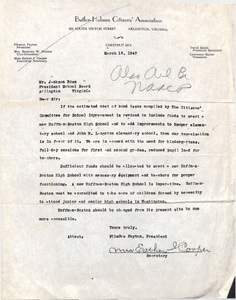 This letter, signed by Esther Cooper in her capacity as Secretary of the Butler-Holmes Citizens Association, requests additional funds from a county bond issue to finance the building of a new Hoffman-Boston High School and improvements to Kemper and Langston elementary schools. This letter dates to the sixth year of Cooper's NAACP campaign for improvement of the Black schools in Arlington County.

Thirteen high school seniors graduated from Hoffman-Boston in 1941, the school’s first graduating class. In the seven years since these students had advanced to junior high, neither the junior high nor the high school had received accreditation from the state. The facilities in the former elementary school were limited, and teachers often had to teach multiple subjects. While the teachers at Hoffman-Boston were considered to be excellent educators, the school’s small faculty simply couldn’t offer the same variety of courses that the larger all-white Washington-Lee High School could.

Nearly three quarters of Black students in Arlington who were of age to attend junior or senior high school were either attending schools in Washington D.C. or were not attending school at all.

In this 1947 letter from the Butler-Holmes Citizens’ Association, signed by Esther Cooper, we see these demands reiterated six years after her campaign initially began.