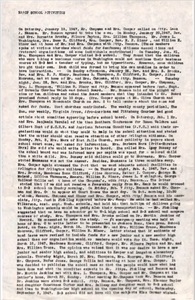 Narrative of education-related NAACP actions in Arlington around the time of the Constance Carter case.

In 1946, the District of Columbia school system announced that students from Arlington who attended D.C. schools would have to pay tuition. This presented a special difficulty to Arlington’s Black community. Black public schools in Arlington did not have the same resources as those of the county’s white schools or schools in the District. Moreover, the tuition represented a larger burden for most Black Arlingtonians, who made less on average than the county’s white citizens.

Urged on by the NAACP, the Arlington School Board agreed to pay tuition for the remainder of the year for Arlington students enrolled in D.C. schools. During the next few months, however, there were few signs that progress was being made toward improved facilities or offering more classes for Black students in the county. 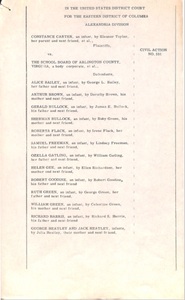 Civil Action No. 331 in the United States District Court for the Eastern District of Columbia, Alexandria Division, which was a movement to add additional complainants to the Carter case.

On the opening day of the next school year, September 3, 1947, Constance Carter, a Black high school student in Arlington, arrived at the all-white Washington-Lee High School. Her mother, NAACP member Eleanor Taylor, accompanied her. Together they attempted to enroll Constance at the school, stating that Hoffman-Boston did not offer the classes she wished to take, including Spanish, typewriting, and physical education.

Washington-Lee principal Claude Richmond refused Carter’s request, citing the Commonwealth’s requirement that all public education be segregated. Carter and Taylor, represented by NAACP attorneys Spottswood W. Robinson III and Martin A. Martin, then filed a lawsuit against the county schools. 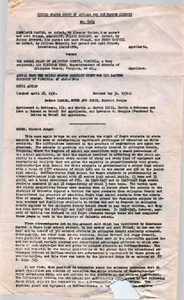 Constance Carter v. The School Board of Arlington County, Virginia: Complaint and Opinion, 1950.

Robinson and Martin saw this as a Fourteenth Amendment “equal protection” case. Although Supreme Court case Plessy v. Ferguson (1896) held that equal protection and equal rights are not abridged as long as public facilities and services are “separate but equal,” public education for Blacks in Arlington was demonstrably unequal. While the presiding District Judge Albert V. Bryan acknowledged the inequality of facilities and classes offered, he did not accept that this resulted from an intentional disparity. He ruled instead that it was a result of “defects of administration for administrative correction, not constitutional offenses for judicial interference."

Upon appeal, however, federal judge Martin A. Soper reversed the decision, ruling for Carter on May 31, 1950. He then ordered Judge Bryan to notify the School Board that they would be required to provide equal facilities for the county’s Black students.

In the next few years, the pay rate for Black teachers in Arlington was raised to meet that of white teachers, and money was earmarked for improvements to the facilities of Hoffman-Boston and other Black schools.