1956: Clarissa Thompson v. the County School Board of Arlington is filed

As the second anniversary of the Brown decision approached, opponents of segregation in Arlington had seen almost no progress in the implementation of the ruling. Finally, on May 17, 1956—the second anniversary of the original Brown ruling—Virginia NAACP lawyer Edwin C. Brown filed suit against Arlington County’s School Board. The NAACP filed similar suits in Front Royal, Newport News, Norfolk, Charlottesville, and Warren County.

Suits were filed in these places because they had particular things in common—they were areas with low Black populations, with larger than average populations of white racial moderates, and where the Byrd machine was absent or not particularly powerful. These shared traits, the thinking went, meant that they might be more open to desegregation.

Clarissa Thompson, daughter of NAACP member Ethel Thompson, was the first name on the suit, but it was actually brought on behalf of several students, including the children of civil rights activists Lesley and Dorothy Hamm and the children of Barbara Marx, one of the few active white members of the Arlington NAACP. The child of another white family was initially named in the suit, but that family dropped out after two weeks after receiving telephoned threats. Barbara Marx, who had been in Nazi Germany as a young woman, was undeterred by similar threats.

Federal Judge Albert Bryan, who had been the first judge on the Constance Carter case, ordered the schools to be integrated, but the particular wording of his injunction stated that the students could only come back to the court to seek enforcement of that order if they could prove that they had gone through all appropriate bureaucratic channels. This included the Commonwealth’s Pupil Placement Board, a body that had been created in Richmond that summer and had ultimate power over placement of students.

The case at that point was plunged into a complex set of appeals and bureaucratic red tape that would last two and a half years. 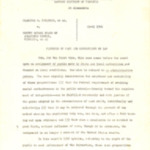 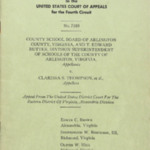 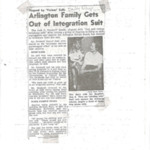 Newspaper article from Daily News, "Arlington Family Gets Out of Integration Suit" June 4, 1956 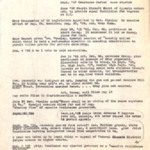