Desegregation is Not Integration 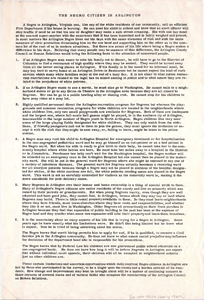 Broadside: "The Negro Citizen in Arlington," published by American Council on Human Relations

On December 27, 1962, Dr. Martin Luther King Jr. said in an address to a church conference in Nashville, “…desegregation alone is empty and shallow. We must always be aware of the fact that our ultimate goal is integration, and that desegregation is only a first step on the road to the good society.”

Gloria Thompson, Michael Jones, Ronald Deskins, and Lance Newman entered Stratford Junior High School in 1959. Over the next few years, other schools would begin to desegregate. But it is important not to confuse that desegregation with integration. It took years before Arlington approached true integration of its public schools. It required not just gradual change over time but more advocacy, struggle, and at least one more major lawsuit.

Moreover, much of the county outside of the school system was still very much segregated. That, too, took time, campaigning, and organizing to change.

The documents collected here represent the reality of the segregation that persisted in Arlington years after Stratford: from bowling alleys to housing to the local hospital.

A 1963 broadside titled “The Negro Citizen in Arlington” shows the true depth of the segregation that remained. Among the injustices that the document catalogs: all the movie theaters and drive-ins in Arlington were whites-only; there were no decent sit-down restaurants that allowed Blacks to eat in their dining rooms; and the maternity ward at Arlington Hospital would not admit Black mothers.

The document closes with a defiant tone, pointing to the constant precarious state of Black life in Arlington, even in the face of growing legal equality:

It is the uncertainty about so many aspects of his life that is trying for a Negro in Arlington. Some years ago he knew exactly what his limitations were. He didn’t like being limited but he knew what to expect. Now he is tired of being unknowing about his status.

The Negro knows that merit hiring permits him to apply for and, if he is qualified, to receive a Civil Service job in the Arlington community. He does not know to what extent racial prejudice may influence the decisions of the department head who is responsible for his promotions.

The Negro knows that by Federal Law his children are now guaranteed public school education on a non-segregated basis. He does not know how long it will be before Negroes in Arlington can expect that without individual court appeals, their children will all be accepted in neighborhood schools just as other children are.