By January of 1959, the state had exhausted all its legal countermeasures to the Thompson case. Many Arlington parents were still worried that the School Board would choose to close the schools rather than desegregate. The final nail in the coffin of Massive Resistance came on January 19, when the Virginia Supreme Court struck down the school closure law, ruling that it violated the guarantee of a free public education in the Virginia Constitution.

On January 22, 1959, the School Board held a special meeting and announced that Stratford Junior High would be the first school to be desegregated.

Finally, on February 2, four students—Gloria Thompson, Ronald Deskins, Lance Newman, and Michael Jones—walked up to Stratford just after the first bell at 8:45 a.m. The four students lived nearby but gathered at a single house that morning before walking the last bit together. Close to 100 police officers formed a cordon along the road leading to the school. The memory was still fresh of the angry white mobs that formed in Little Rock, Arkansas when that school was desegregated a little more than a year earlier.

Ultimately, the desegregation of Stratford arrived without incident. There were no angry mobs, no shouted words, no brickbats. Stratford principal Claude Richmond—the same man who, as principal of Washington-Lee, had turned away Constance Carter in 1947—welcomed the students. By all accounts, Richmond made every effort for the new students to feel welcome and safe.

Despite the police and reporters, it was essentially a normal day at school. The newsletter of the Anti-Defamation League, reporting on the desegregation of Arlington schools, ran the headline: “The Day Nothing Happened.” And that seems to have been the case, for the most part.

Here you can see oral histories and accounts of that day from the people who lived it. Take a moment to read or listen. 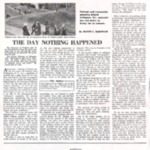 "The Day Nothing Happened," from the Bulletin of the Anti-Defamation League; article discusses the events of the first day of desegregation at Stratford. 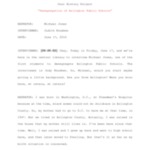 Michael Jones, one of the four students to desegregate Stratford Junior High, describes his of his experience of desegregation. Click through for excerpts or the entire interview. (Both sound clips and transcripts available.) 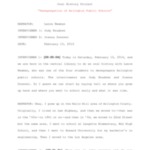 Lance Newman, one of the four students to desegregate Stratford, describes his of his experience of desegregation. Click through for excerpts or the entire interview. (Both sound clips and transcripts available.)